On Wednesday 3 May 2017, Blyth Valley Green Party selected Dawn Furness as its Parliamentary candidate for the snap General Election taking place on Thursday 8 June 2017. Dawn is local to the constituency and lives in Cramlington. She has worked as a music teacher, performer, and film maker across the North East for the last twenty years and previously stood for the Green Party in the 2015 General Election. 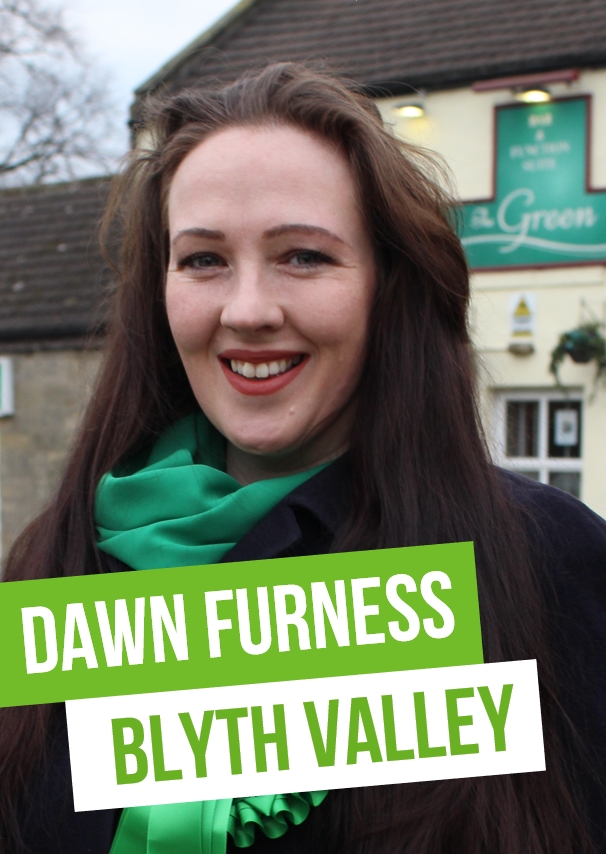 Following her selection, Ms Furness made the following statement:

“I feel incredibly privileged to represent Blyth Valley Green Party and progressive politics at the national level. Greens stand for equality and fairness, supporting both people and the planet.

Make no mistake, Theresa May called this snap election in a profoundly cynical attempt to secure her own leadership mandate before police forces across the country have concluded their investigations into the allegations that the Conservative Party broke Electoral Law at the last General Election by omitting substantial amounts from their local spending returns in key marginal seats. Far from being the actions of a ‘strong and stable leader’, the Prime Minister’s U-turn on calling an early election shows that her word cannot be trusted. Local parties and voters themselves are already consumed with campaigns for parish, council, and mayoral elections. The formal nominations process that would normally be allocated several months by the Electoral Commission, has had to be compressed into a mere few days before a deadline of 4pm on Thursday 11 May 2017. This is nothing short of a deliberate attempt to crush any opposing voice that will hold the Government to account on its appalling record in office.

In recent months, the Prime Minister has shown that she is willing to sacrifice vital workers’ rights and environmental legislation that is currently safeguarded under EU law, as well as action on climate change, in favour of turning Britain into a tax haven for multinational corporations and signing new trade deals that will endanger our hard-won labour, consumer, and environmental protections. The EU, while far from perfect, is not our enemy and we should seek to maintain good relations with the world’s largest ‘single market’. We should approach the Brexit negotiations in a responsible, diplomatic manner, and should put the final deal to the British people in a ‘Ratification Referendum’. Indeed, it is alarming that the Conservative Government has yet to fully understand that Britain cannot leave the EU and enjoy the same economic benefits as it does now without compromising on freedom of movement, or that they have yet to undertake an impact analysis of the damaging effect that leaving without a deal would have on our economy.

Brexit is a hugely important issue, but it should not detract from tackling the climate crisis and social inequality. This General Election is a chance for people to vote for a positive future that seeks to solve the major problems of our times rather than pushing these onto the next generation. The Green Party offers a collaborative and progressive approach to the outdated partisan form of politics that holds sway at Westminster. Caroline Lucas, co-leader of the Green Party, has already championed calls for progressive parties to work together to halt the Conservative’s obsession with austerity, climate change denial, and extreme Brexit.

Please join us to make a fairer society. Vote Green on 8 June!”

You can support Dawn's campaign by contributing directly to her Crowdfunder. She also encourages anyone who shares our values to get involved with the party and her campaign. See our Get Invoved page for more details on how you can make a difference.